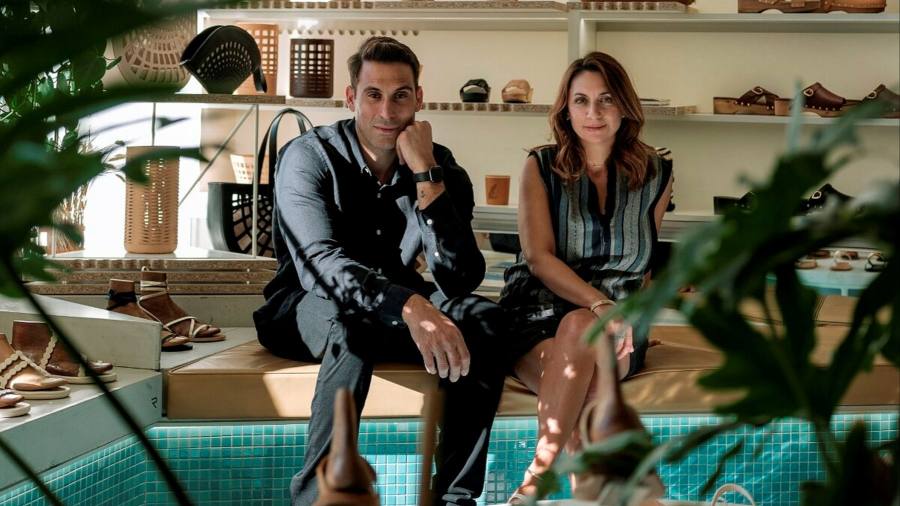 The Greek brand that modernizes mythology

In 2008, Christina Martini and Nikolas Minoglou were introduced by a mutual friend and went out to dinner together in Athens. Their topic of discussion? Greek sandals. Martini, trained at Cordwainers in London, then living in Paris, a high-flying shoe designer at Balenciaga who had previously worked with Marc Jacobs at Louis Vuitton. Minoglou, whose grandfather founded a rubber shoe company in Greece in the 1950s, had recently completed an MBE at Babson College in Boston and was looking to start his own business.

“We both realized there was a hole in the market,” says Martini, speaking from her studio in Corfu, where she now lives with her husband Apostolos Porsanidis Kavvadias and her young family in an olive grove. “We wanted to make good quality Greek tourist sandals and export them.”

“Our friends would come to Greece and buy sandals and olive oil and go home,” adds Minoglou. “We knew people liked them. But we realized the quality and design weren’t where they should be. We have seen Greeks despise sandals, inheritance. We wanted to do the opposite, take our heritage and make it something more modern and better. It was a very specific idea, hence its name.

This year, Ancient Greek Sandals celebrates ten years of activity. Manufactured in Greece and sold worldwide, from America to Japan, through its own website (antiquegreeksandals.com) and Athens flagship, and through retailers such as Le Bon Marché and Net-a-Porter, it has a loyal following through its ranges for men, women and children. The models range from the traditional Greek sandal with thin leather soles to more trendy contemporary versions sprinkled with crystals or colored rubbers. The brand also produces sandals with thicker soles for urban environments, as well as clogs and flip flops. The simplest leather styles for women start at around £155 – double the price of the most basic Birkenstock, but only a quarter of the equivalent styles from international designer names – and clogs can go up to £295 .

Different regions favor different varieties. From the beginning, Ancient Greek Sandals’ biggest market has been America. “They prefer the more bling styles, the evening styles, the crystals that we’ve been doing lately. Or jewelry from our collaboration with [the New York fine jewellery brand] Lalaounis,” says Martini. “Americans also like something sweet. This is one of the reasons why we made a comfort construction, with a thicker sole. The Asian market likes it too. The French really admire ancient Greek culture, so they prefer leather styles that have straps and cutouts. But everyone in the world knows about Greek mythology, ancient Greek art and architecture, so it’s an easy concept to love.

The brand’s anniversary capsule collection celebrates this eternal fascination with the land of the gods, with 10 models of sandals inspired by ancient Greek sculpture. Martini worked with art historian Xenia Ventikou to select pieces currently found in international museums, including the Louvre, the British Museum and the Metropolitan Museum of Art.

“I had in mind to tell the story of women, goddesses, priestesses, matriarchs and heroines, each unique in their own way,” explains Ventikou. “We also wanted to cover the full length of Greek art, from the Geometric period to the Romans.” Martini and the design team pored over seven statues, two figurines, and a vase, finding details and patterns to draw design inspiration from: twisted necklaces seen on ancient clay figurines; the delicately pleated dresses of classical statuary; the sandals attached to the ankle found in the sculptures of Artemis the hunter; and the wings of the Winged Victory of Samothrace and the draped skirts of the Venus de Milo, two of the most famous statues in the world, both found today in the Louvre. “I love how the Lady of Auxerre’s famous locks of hair have been transformed into lace, and the crouching Venus’ arm bracelet has become an anklet,” says Ventikou.

In the still fragile days following the Greek financial crisis, making Ancient Greek Sandals an international but seasonal brand, outside of the traditional fashion capitals, was always going to be a challenge. Only a handful of Greek fashion brands, such as Zeus & Dione, have made a global name for themselves from their home country. Both Marios Schwab and the late Sophia Kokosalaki enjoyed success in London. “Yes, things can be more difficult in Greece compared to starting something in a fashion capital,” says Minoglou, “but on the other hand, because Athens is a small community, and because we had the company of my grandfather and my father as a platform, we had a lot of contact with the factories and the administration, the crisis was actually beneficial because in the four years that followed, the factories were closing again and the open ones had excess capacity, so we were able to get their attention more easily.

Seasonality was taken into account from the outset. “We both agreed that it was better to focus and do something really good than to have a multi-season, multi-category brand,” says Minoglou. “Sales aren’t as strong in the winter,” adds Martini. “We have the southern hemisphere, Australia, but there is no comparison to the European/American summer season.”

According to Minoglou, the business has been profitable, without a loan, since the first year. “From 2017 to now, the brand has grown 25% on wholesale and direct-to-consumer,” he says. “Covid took us down 30% overall, but now we’re at pre-pandemic levels, a bit more.” The pandemic has hit the company with wholesale issues and a dramatic disruption to international travel. It stopped production for three months. “We adopted a more aggressive strategy in terms of digital marketing because our online store was operational from start to finish. So we promoted publications to liquidate the stock and very quickly introduced a recycled collection with a lower starting price. We came out of it healthy, with no major scars.

The brand, which opened its flagship store in Athens in 2019, has recently branched out into homewares, including leather blankets and basketry inspired by Martini and Kavvadias’ home in the olive grove, and introduced a collection of leather bags (from £155) and crochet bags (from £215), which Martini and Minoglu expect to be an important future category. Collaborations with other brands and individuals continue to be a way to introduce creative newness to tried-and-true sandals. There have already been partnerships with Australian jeweler Lucy Folk, influencer Harley Viera Newton and the Sirenuse Hotel on the Amalfi Coast. Future plans include setting up a store in an international hotel.

While Minoglou is based in offices in Athens, close to manufacturers and suppliers, Martini continues to find inspiration in its sea-view location in Corfu, where it moved from Paris the same year they opened. created the brand. “If it hadn’t worked with the sandals, I would have had to back off,” she says. A decade and that’s not a problem. “For high fashion design I don’t think Corfu would work, but for what I’m doing now it’s the perfect place.”