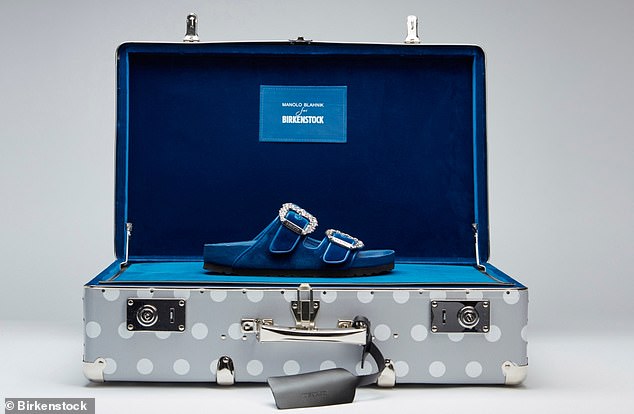 Manolo Blahnik teams up with BIRKENSTOCK for sparkly sandals

Would you pay $800 for Birkenstocks? The sandal label teams up with Manolo Blahnik on a velvet and crystal version of his signature shoe inspired by Carrie Bradshaw’s wedding heels (but would SHE really wear them?)

By Carly Stern for Dailymail.com

In the most unlikely fashion collaboration since Crocs and Balenciaga, this month high-heel label Manolo Blahnik and hippie sandal label Birkenstock announced a new collection.

The first seven styles go on sale March 24 and will include classic Birkenstock sandals and slides in colors like blue and pink with Blahnik’s signature rhinestone buckles.

The blue velvet Arizona and Boston styles, in particular, recall a more relaxed take on the crystal-buckle embellished pumps Carrie Bradshaw chose for her wedding to Big in Sex and the City.

Manolo Blahnik and Birkenstock will release seven styles on March 24, priced at $750-$800

“Trust is only possible when you feel comfortable,” Blahnik told the Wall Street Journal.

“It’s not necessarily about creating a new category in its wardrobe but about adding the combined efforts of our teams into a beautiful object. We added shine to Birkenstock, which had never been done before.

Blahnik himself said he’s owned Birkenstocks since the 1970s and wore them almost every day in his backyard.

“Trust is only possible when you feel comfortable,” Blahnik told the Wall Street Journal.

“They practically molded themselves to my feet,” he said, while Kristina called them “timeless.”

“Probably every single person in the business owns a pair of Birkenstocks and has done so forever,” she said.

The March 24 product drop will be the first of two, the second in June.

Birkenstock CEO Oliver Reichert pointed out that the brand has already partnered with several other top designers, including Rick Owens, Jil Sander, Proenza Schouler and Dior – and he regularly turns down requests to collaborate.

Previously, Blahnik and her niece appeared in Birkenstock’s Spring/Summer 2020 campaign.

“In my youth, when I traveled often, Birkenstocks were my favorite vacation shoes,” he told WWD at the time.

“I vividly remember one particular trip to Sicily where I explored for hours and covered miles in my Birkenstocks. They are smartly designed and wonderfully comfortable, with classic continuity.

‘I wear Birkenstocks when tending to my beloved garden in Bath [England]. Combining them with colorful Paul Smith socks is a must! I respect that as a brand they have never conformed to trends and have a philosophy of creating designs that are built to last,” he added.

CEO Kristina also said she likes the “simplicity” and the “comfort guarantee”.

“From a brand perspective, Birkenstock upholds many of the values ​​that we adhere to at Manolo Blahnik, a family business steeped in tradition that believes in the creativity of the artist and the skill of the craftsman,” a- she declared.

Yes or no ? Gucci brings back jelly sandals for R7,500