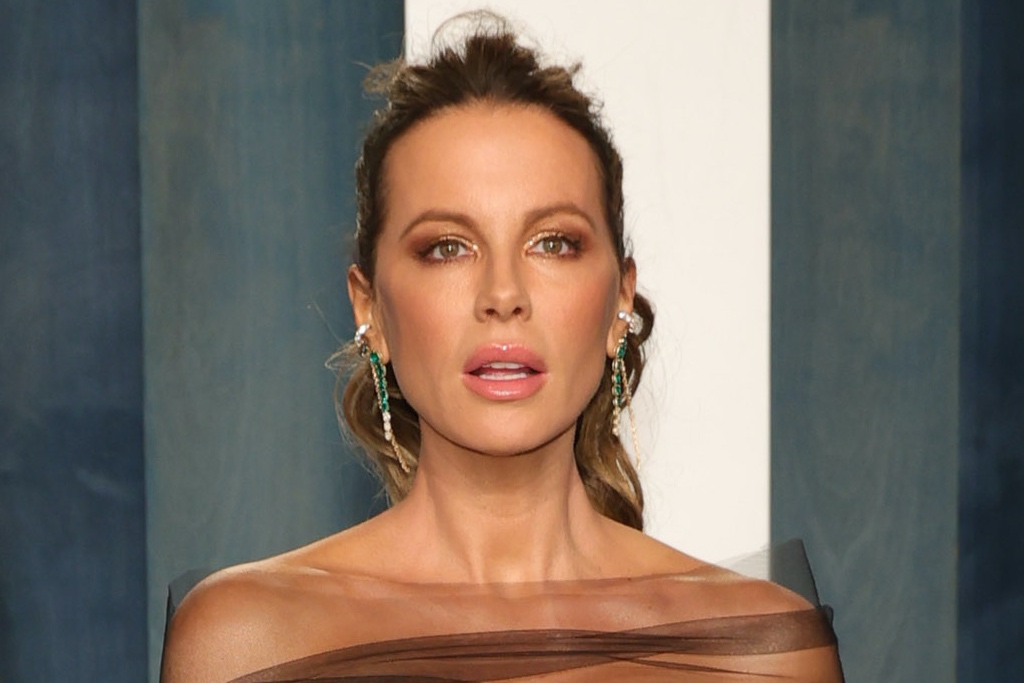 Kate Beckinsale packed a fashion punch while bonding with a baby fox this week.

The “Guilty Party” star was comfortably dressed at home while enjoying some quality time at her parents’ house with their resident fox. For the occasion, she wore a set of pink shorts with a gathered waistband. Giving casual bottoms a whimsical business-ready nature was a coordinated blazer with pointed lapels. Adding a bold touch to Beckinsale’s outfit was a white T-shirt, with black lettering that read “F-ck You, You F-cking F-ck” — a cheeky reference to the 1986 crime drama “Blue Velvet.” Her look was complete with sunglasses and a white hair bow.

As for footwear, the “Jolt” star chose a set of platform combat boots. Beckinsale’s style featured black leather uppers, as well as a lace-up silhouette with silver eyelets. The pair was complete with buckled ankle straps, as well as chunky platform soles and block heels that appeared to total at least 4 inches in height. The boots gave the actress’ outfit a grungy touch while reinforcing her devotion to platform shoes – something she demonstrated on several occasions, wearing the same pair during activities ranging from petting giraffes to simulating a flight with her cat, Clive.

Platform boots are a major trend this year, with chunky-soled styles like those from Beckinsale adding height and comfort. Chunky pairs with block heels or ridged soles also give most ensembles that extra edge. In addition to the “Farming” actress, styles from Balenciaga, DKNY and Prada have also been spotted on Olivia Culpo, Carrie Underwood and Khloe Kardashian in recent weeks. Beckinsale is no stranger to style, sporting a similar pair while playing with puppies earlier this month.

When it comes to shoes, the “Underworld” actress usually prefers her black ankle and knee boots. However, she also wears Naked Wolfe platform sneakers and Saint Laurent sandals when off duty. For formal occasions, Beckinsale dons chunky pumps and sandals from Christian Louboutin, Jimmy Choo, Valentino and Stuart Weitzman. She is also a significant force in the fashion world, regularly appearing on the front rows for brands like Elie Saab, Moschino and Giambattista Valli, among others.

Click through the gallery to see Beckinsale’s edgiest looks over the years.

These 3 shoes can get you through 4 months of hiking