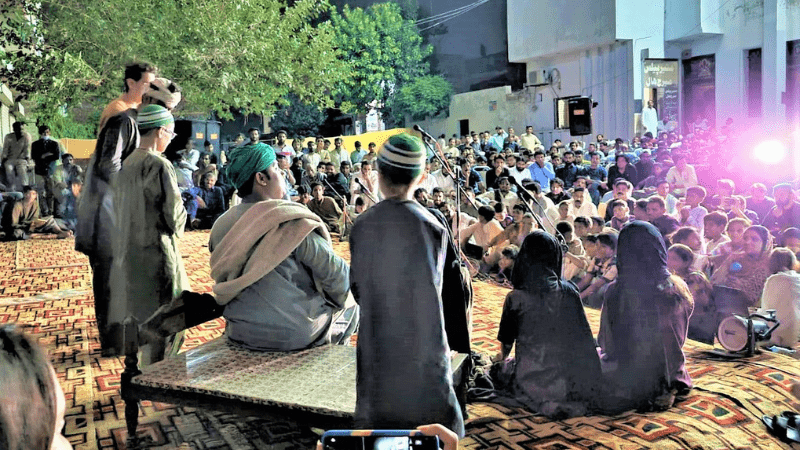 Every year, Punjabi theatergoers are among the many who gather in Kasur, Punjab, to honor the 17th century Sufi poet Bulleh Shah at his shrine. The three-day urs (anniversary of the death of a Sufi saint) includes an annual theatrical performance and this year, which marked the 265th anniversary of his death, a play titled Konan Kon Sunja Tey (The Identityless Connect with the Identityless) was played.

Famous street theater and Punjabi culture artist Huma Safdar has been taking his Lahore theater troupe, Sangat, and singing team to Kasur for 12 years and this year was no different. On their way to pay homage to the great poet, they hurried to arrive in time for the 60-minute show. The local host, from the Sanjha Vehra organization, in turn brought together theatergoers from the surrounding neighborhoods to join the audience.

Konan Kon Sunja Tey is directed by Safdar and written by Najam Hussain Syed. Involving a lot of dance and music, the piece is about Nizam Lohar and his band who challenged the British colonial authorities in the pre-partition era. The British declared it dacoit, but it is popularly referred to by the Punjabi word dakoo. Lohar was killed in an encounter with the British after being tricked by a friend who conspired with the colonists. He shared his friend’s whereabouts to acquire the bounty on his head.

The piece is inspired by the Punjabi tradition of dhola — a form of storytelling where people’s heroes are constructed, historical facts and memories around them are gathered and knitted together in a popular poetic way. Most dhola are part of the oral history of Punjab. This kind of work is done by Harappa-based writer AD Ijaz who collected dhola, sung and commemorated Ahmed Khan Kharral who was killed in September 1857 by the British for leading a public revolt in Neeli and Sandal Bar. Within 48 hours, local rebels from Neeli and Sandal Bar took revenge by assassinating Lord Berkeley on the left bank of the River Ravi.

Ijaz is the first person in Punjab to collect war stories after 15 years of effort, capturing the heroic struggle of Kharral. His book Kall Bulandi Aya was published by the Punjabi Adabi Board in the 1980s and is considered a pioneering document in the Punjabi oral tradition.

The author of the play, similarly, wrote about the 20th century Punjabi poet Noori Kemoke whose poem Noori Di Boli, was considered one of the most critical works of Punjabi literature. In one of the narrations of his book Ahiyain Vechoun Nahiyain, Syed quoted Noori Kemoke dhola about Nizam Lohar from the early 19th century and linked him to the resistance of the bar people who had raged around the cities of Lahore, Amritsar and Kasur during the colonial era:

Nizam heard the voice and roared.

The lenders knelt before the colonial occupiers,

seeking the protection of Nizam Lohar.

Nizam declares his resolve to rob capitalists, hoarders and goldsmiths.

Nizam draws a line and stands up;

it gives power to the peasants, to the workers and to the helpless.“

‘Kaal’ is the female voice of a from dhola narrator. It symbolizes the accumulated pain of the centuries-old history of oppression. However, in Konan Kon Sunja Tey, the writer Syed goes beyond the dhola and expands the story with a broader angle of sensitivity where the contribution of women to the resistance is taken into account. The writer developed and shaped characters, giving them a deeper engagement with the issue of freedom. He also sensitively dealt with religious biases in the play and highlighted the major contradictions of this period.

The performance team consisted of the experienced female cast of Sangat and volunteers from the Fresh Graduate Courses of Faisalabad Agricultural University. Nazir Joya, president of Sanjha Vehra, arranged the play. He said Pictures the production was experimental for local audiences and fun for regulars in the plays. “Because they know Sangat and the team like their neighbours, friends and comrades,” he explained. Sangat and Sanjha Vehra both believe in creative initiatives and collaboration of non-commercial people.

According to Joya, more than 1,200 people – children, women, public school students, Punjabi intellectuals from other cities and the general public – were invited to watch the street performance. Many families also watched from their balconies.

Audience members also enjoyed it. Alyas Ghuman, who was from Gujranwala, told Pictures that it is not commercial theater – but theater with a purpose. He called the colors, live music and the actors’ performance “wonderful”.

Rohi Nala resident Riaz Ahmed praised the performance and the actors (who are students and part-time workers), saying they acted perfectly, “like mature actors.”

Joya Market resident Naheed Bibi said the performers were completely in tune with their roles as well as with the audience. “It’s not theater but rather a dialogue between the public, the musicians and the actors,” she added.

Bodega and Suicoke Link on the Kaw “One of One” sandal